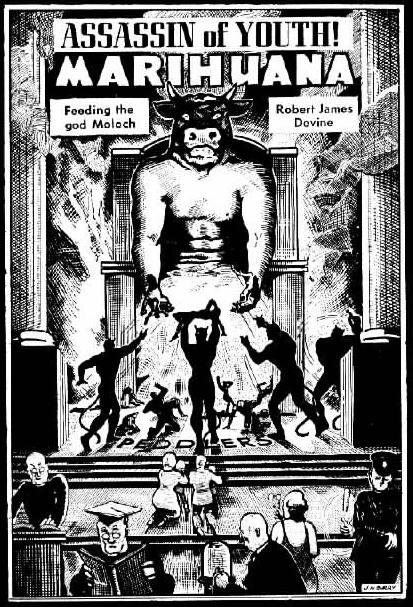 "Not long ago the body of a young girl lay crushed on the sidewalk after a plunge from a Chicago apartment window. Everyone called it suicide, but actually it was murder. The killer was a narcotic known to America as marijuana, and to history as hashish.

Used in the form of cigarettes, it is comparatively new to the United States and as dangerous as a coiled rattlesnake. How many murders, suicides, and maniacal deeds it causes each year, especially among the young, can only be conjectured.

In numerous communities it thrives almost unmolested, largely because of official ignorance of its effects. Marijuana is the unknown quantity among narcotics. No one knows, when he smokes it, whether he will become a philosopher, a joyous reveler, a mad insensate, or a murderer.

The young girl's story is typical. She had heard the whisper which has gone the rounds of American youth about a new thrill, a cigarette with a "real kick" which gave wonderful reactions and no harmful after-effects.

With some friends she experimented at an evening smoking party. The results were weird. Some of the partiers went into paroxysms of laughter, others of mediocre musical ability became almost expert; the piano dinned constantly. Still others found themselves discussing weighty problems with remarkable clarity. The girl danced without fatigue throughout a night of inexplicable exhilaration.

Other parties followed, finally there came a gathering at a time when the girl was behind in her studies and greatly worried. Suddenly, as she was smoking, the thought of a solution to her school problems came. Without hesitancy she walked to a window and leaped to her death. Thus madly can marijuana "solve" one's difficulties.

It gives few warnings of what it intends to do to the human brain. Last year a young marijuana addict was hanged in Baltimore for criminal assault on a ten year old girl. In Chicago, two marijuana-smoking boys murdered a policeman.

In Florida, police found a youth staggering about in a human slaughterhouse. With an ax he had killed his father, mother, two brothers, and a sister. He had no recollection of having committed this multiple crime. Ordinarily a sane, rather quiet young man, he had become crazed from smoking marijuana.

In at least two dozen comparatively recent cases of murder or degenerate sex attacks, marijuana proved to be a contributing cause. In Ohio a gang of seven marijuana addicts, all less than 20, were caught after a series of 38 holdups. The boys' story was typical of conditions in many cities. One of them said they first learned about "reefers" in high school, buying the cigarettes at hamburger stands, and from peddlers who hung around the school. He told of "booth joints" where you could get a marijuana cigarette and a sandwich for a quarter, and of the shabby apartments of women who provided the cigarettes and rooms where boys and girls might smoke them together.

His recollection of the crimes he had committed was hazy. "When you get to floating", he explained, "it's hard to keep track of things. If I had killed somebody on one of those jobs, I'd never had known it. Sometimes it was over before I realized that I'd been out of my room."

It is the useless destruction of the youth which is so heartbreaking to all of us who labor in the field of narcotics suppression."